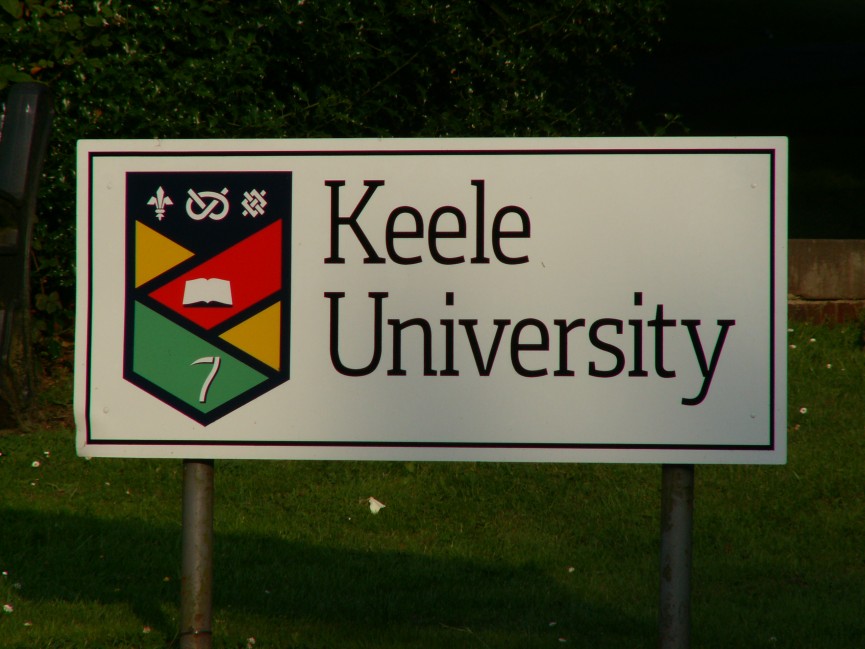 Sorry, this one’s in English again. Not that I’m particularly good at this but I guess the subject kind of asks for it. Short introduction: I proposed a talk about media literacy, film analysis and youth culture for the Teenage Kicks conference and was accepted. So I went to Keele University (Staffordshire, England) for my first non-national conference. Some may remember me being at re:publica in Berlin earlier this year which is more like a convention then an actual conference and of course is in Germany but still kind of was a big deal already. But since I had to actually present this time and would go overseas I can safely say that this one was a bigger deal to me from the start. This will not be about the scientific content of the conference (I might sum this up later) but rather about the journey from a travelers perspective.
And it turned out great but I’m jumping ahead…

I went to Keele from July 11th until 14th. The conference actually ended on the 13th but there was no direct (or cheap) flight back to Berlin and so I decided to stay until Sunday. Also, I like Britain, and as some readers of this blog might know, had been to London several times in the last years. I figured having at least a glimpse of another region of England might be worth and extra day.

Travelling there was rather pleasant until I landed at Manchester airport, realizing that the taxi I had ordered to pick me up was not there. After roaming through the terminal and waiting for 40 minutes, I decided to call them just to find out that my booking was nowhere to be found. Actually I talked to a guy with a thick indian accent whom I couldn’t understand most of the time. We couldn’t sort out what had gone wrong so I decided to get a different and more expensive taxi (not really knowing how to go there by train, which as it turned out would have been a cheaper alternative). As I had left my bed at 5am in the morning I had a quick nap on the back seat. When I woke up my driver tried to explain to me in what I guess is a thick Cockney accent that he just missed the exit from the motorway. But as professionals do he found back on the right route and after what seemed to be a ride of less than an hour I arrived at my destination.

The first thing I noticed about Keele University was its huge campus (260 ha), so one might say that, unlike the famous Tardis, it looks bigger from the outside. I was told there are over 10,000 students (Wikipedia says there were 12,600 in 2006, and a staff of 1,400), about 70% of which live on campus. The University of Magdeburg in comparison has 14,000 students and over 2,700 staff members, but there is a rather large city to house the students and the two inner city campi are quite packed with multi-story buildings. The village of Keele is home to over 3,500 residents, so basically the village is part of the University. g

Telling my driver I wanted to go to the Chancellor’s building he was kind enough to drive me around until we finally found it. Although I had a map I’m not sure if I would have found it myself. Because of the delay I arrived right after lunch had ended. So I got myself a key to a room yet unknown and a basic description on how to get there. Holly Cross was easy to find, I was greeted by hordes of students sitting on the floor in a kind of Hitchcock’s ‘The Birds’ – manner as they prepared to leave for summer (I found out later). I quickly went to my room making myself at home in under 30 minutes and then decided to get something to eat. Luckily the restaurant still had great food available. Then I snuck into my first panel. I realized that the conference was in fact not as big as I had expected but that turned out to be a good thing because it was much easier to get in touch with people. The language barrier (and probably the fact that I arrived quite weary) kept me from making a lot conversation in the beginning but I got used to that and coffee also did its part. I’m not really much of a talker but unlike other events (and conferences) I had been to, it seemed quite easy to find common ground most of the time, so I started to enjoy myself quite quickly even when I was just listening.

Just to quickly cover some aspects of the content, I had mostly looked into youth cultures and subcultures for my seminars about film analysis on the subject. I also am very interested in what can be called the hacker culture but I never had looked very closely at british youth cultures and how they influenced Europe in the last 50 years. Many of the talks were about those aspects and I really learned a lot or at least made new connections in my head on known subjects.

I liked the programme which had not only talks by researchers of different disciplines but also readings by artists that were very fitting and exciting as well as movie screenings and discussions with the makers. I really liked the idea to approach the subjects from so many perspectives as it also eased up the overall structure of the conference. Plus, bringing artists into media subjects seems to make great sense, knowing that e.g. Marshall McLuhan had this idea that only artists as integral men (and women) have a way of looking behind what media does to our perception of reality and using them to re-balance the senses. So far, right up my alley. Films and literature were the main media systems with (afaik) only one talk touching on computer games and many pointing out the importance of music and dance for subcultures but not actually analyzing them as media (again, afaik). Still, I felt quite at home there, scientifically speaking.

Every conference I’ve been to rises and falls with the food available. And the food was great (some friends back in Europe seemed to be surprised by this fact) as we had varied breakfast buffets as well as great dishes for lunch and dinner (and marvelous deserts!). For Friday Night Dinner we went to Keele Hall which is this great old building at the center surrounded by a grand garden and park. Great place and great food.

I had my talk on the last day and although I had practiced it to death of course I had made some changes just the evening before simply to keep me on my toes. I don’t know if it was improved by that but I guess it came out quite ok. I wondered whether it would fit well with all the other talks I had seen the days before but then again I hoped it would be different enough to not be too boring. I’m not sure if I hit the mark but if I didn’t, well, I can do better next time. 😉 Â Btw. these were my slides:

On Saturday there was no lunch and as Tim, a fellow attendee/presenter and student at Keele, pointed out there would be no breakfast the next day so I got some groceries for Sunday but hoped I could get a warm meal somewhere on this huge campus. As it turned out the only restaurant open was in the village and so after I had a rather colorful look inside the students accommodation and managed to disgrace the pool table several times I went to store my breakfast in my room and then went for a walk into town. Keele isn’t huge and I only saw The Sneyd Arms where I had dinner and St. John’s Church which I found close by. I realized once more the beautiful landscape all around the university and we were very lucky with the weather which throughout my trip was very un-british which means pretty warm and sunny. Lucky me!

On Sunday I got my stuff together, left my keys at the reception during what seemed to be a fire alert drill done by security staff and got on the bus to Stoke-on-Trent, where I took a train to Manchester. Arriving at Manchester airport quite early I realized that the waiting line for the Easyjet booth basically filled half of the area already. Obviously they had a lot of flights going off. So after an hour of waiting to check-in, a very intimate security check (like, he-should-have-bought-me-dinner-first-intimate) only because I forgot to put away my keys, and a breathtaking journey through the duty-free area (at least the size of the whole airport Berlin-Schönefeld) I caught my flight and left for a very cloudy Berlin.

It always takes some time to sort out what happened during conferences, what you liked, what you learned, who you met. But now a few days have passed (when I started to write this report) I have to say that I had not only an awesome time abroad but also that the conference clearly inspired me with some new ideas on what our kind of research is about or what it could be. I could probably write another lengthy post about what I think the differences are between German and British universities, what I learned about other research approaches and british youth and subcultures. But instead I’ll just say that this was the kind of experience to expand your horizon in every direction and thereby enabling you to cherish what you already have or make clearer where you might want to improve. I hope I can do something like this again some time, maybe once more in Britain as I grow more fond of it each time I go there. In reaction to all this I’ll probably re-imagine my seminar on youth culture in film (starts in october), at the very least I will add some british films to the list. 😉

Feel free to look at my album on flickrÂ where I have some 150 photos taken during the trip.
As a result of going to Britain I missed a conference in Magdeburg on the same weekend that I had helped to organize. I was very sorry at first but I was told they had a great conference without me and I had this great experience. So in the end everybody won, I guess. g