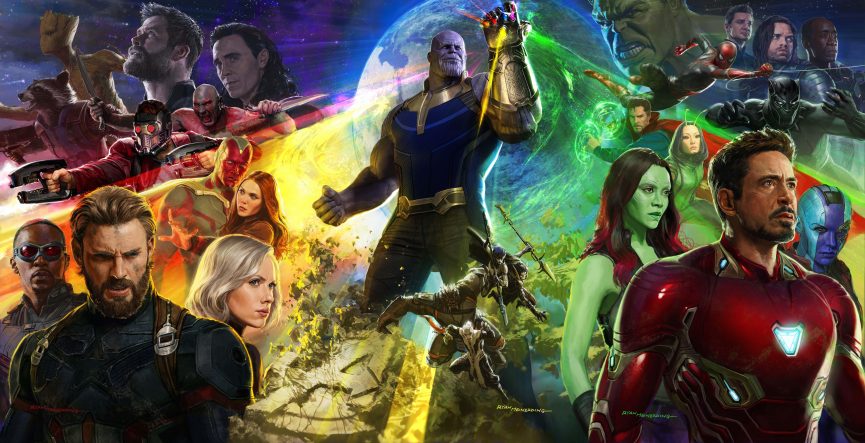 This is kind of a review of the latest Avengers Movie but also a general critique of the business model and artistic architecture of the Marvel Superhero Movies. I will try to keep it light on spoilers for the former, but if you havenâ€™t seen the movie at all, you may want to not read any of this until after you have. But thatâ€™s just a friendly suggestion, if you want to read on, there will probably be spoilers.

Itâ€™s been ten years ago that Marvel, which is of course now owned by the giant Walt Disney Company, started what it called phase one of the Marvel Cinematic Universe with Ironman in 2008. If you were 12 years old back then and got to watch it, you grew up with those movies, of which there have been two or three now each year. Avengers: Infinity War is the 19th and latest installment of that franchise and itâ€™s only the first of a two-movie-arc which continues in 2019. So many if not most of the 22- or 23-year-olds nowadays cannot remember a time when there wasnâ€™t Marvel superhero movies. True, there have been some before, even successful ones like the Sam Raimi Spiderman trilogy. And there is indeed a rich history of superhero movies prior to Marvel (think Batman, Superman). However, there is a pattern of franchise failures, usually starting with the third movie (Batman Forever, Superman III, Spiderman III). Nolans Batman made it, and apparently Marvel has somehow built to improve on that. None of the movies in the MCU has been really catastrophic, and their success has sparked a whole new set of television shows too. They seem to have found the formula for constant success. But I do wonder: Is this just a good thing?

We went to see Infinity War in cinema last week, in the 3D original version (non-dubbed). The story isnâ€™t really that complex or surprising, here it is in a nutshell: Immediately after the events of Thor: Ragnarok (which I have not seen), Â Thanos captures Thor and Loki and kills Heimdall after he sends Hulk back to earth. He already owns two of the six infinity stones and sends his children to get two stones from earth while he is going after the other two himself. Dr. Strange is carrying the time stone and Vision is basically made from the mind stone. So Strange is contacting Tony Stark and they introduce him to the concept of the Infinity Stones. They almost immediately have to fight against Thanosâ€™ guys. Bruce Banner is kinda there, but not helping much. In the end Strange gets captured and Ironman and Spiderman follow him onto the space ship in an attempt to free him.

Meanwhile Vision and Scarlet Witch have taken a little time off in Scotland when they too are attacked and are barely saved by Captain America and Black Widow. And at a totally other place in the universe Thor gets picked up floating in space by the Guardians of the Galaxy. So while the earthly Avengers prepare for the attack of Thanos, Spiderman & Ironman free Strange and decide to take on Thanos directly on his home planet. Thor – back with the Guardians – however decides he needs a new weapon to fight and ventures off to Nidavellir with Rocket and Groot while the other guardians plan on keeping Thanos from getting the reality stone from the Collector. But they fail at that and Thanos takes Gamora with him, so that she leads him to the soul stone. (Spoiler: He gets that one too). Btw, the reason he wants to have all the Infinity Stones (which were created during the big bang apparently and each conveniently keep tremendous power) is so that he can rid the world of overpopulation and all bad things that come with it by simply killing half of the inhabitants of the universe with a simple snap of his fingers. Now thatâ€™s a proper motivation (Spoiler: Itâ€™s not, but it makes more sense than all of the other villains so far).
Meanwhile Dr. Strange and the Avengers explore a plan to keep Thanos from becoming all powerful. In the end one half of the guardians meets part of the avengers on Thanosâ€™ planet, where they try to fight Thanos and take the gauntlet and stones from him. While they fight him Thanosâ€™ delegates on earth fight the Avengers in Wakanda, where they try to destroy the mind stone without killing Vision. So these two parallel fights need to be won to keep Thanos from ruling the galaxy. And of course shit hits the fan big time and the movie basically ends with the consequences of that. “The Endâ€œ is a cliffhanger for the second movie in 2019. 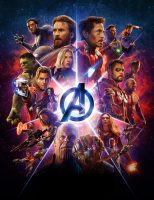 So what did I think of the movie? Itâ€™s a fun ride, combining some of your and my favorite superheroes into what is supposed to be an epic fight. The movie is well-crafted in that itâ€™s technically up to par, even is using 3D in fun ways although it doesnâ€™t add lots to the experience overall (once more Iâ€™m afraid). Thanos is kind of an interesting villain, deeper than any others in the Marvel movies, but given his role has been teased at through a multitude of movies it seems that there could have been much more buildup for him. Actually thatâ€™s true for all of the movie, there is much exposition thrown around in a hurry, new facts never hinted at before are established about characters weâ€™ve seen in prior films (like Gamora) and of course Thanos is getting most of the stones in just one movie, which bares the question what took him so long before or why there was no way to spread that out over some of the other films (like Age of Ultron that seemed to have a very unimportant plot really). And donâ€™t give me the continuity-look, movies and comics have messed with continuity since forever.
So there’s people meeting and going places, but there really is no arc for any of the big characters, they more or less act according to their stereotype… and many of them die. Yes, this was hinted at before and if you know anything about the comics itâ€™s not a big surprise. It also is a lot less exciting than it may sound. The movie is trying hard to build gravitas, but if you know the power of the stones and the general idea of the story, you get an idea where this will go. And since this is a movie for teenagers and we know how far or not far the other movies were willing to goâ€¦ well, itâ€™s like riding a horse on the holodeck. No real danger, no real risk. And thus, while this is fun to watch once, and it has some great moments and humor and all of that, I did not feel suspense and it didnâ€™t have a strong impact at the end of the day. I even felt a little cheated since itâ€™s clear that the pay-off will take another 14 €-cinema ticket and a year of wait to come to fruition, a strategy that I found kinda original when Back to the Future or Matrix did it, but that seems increasingly pointless in those large serials.

Speaking of serials, something becomes very clear for me with the MCU: the essence of comics can not be imitated by movies. The idea that you can tell a big story arc through several issues simply doesnâ€™t translate to movies. In comics or graphic novels, not only are there gaps between panels, there are also gaps between issues and those are basic stylistic elements to create suspense. The reader has to fill in what happens between panels or issues, and thatâ€™s impossible for movies, where we expect a complete story told from beginning to end. Which is why the Marvel movies feel very different than the comics. Especially for the latest movies like Black Panther, Age of Ultron, Thor: Ragnarok and Infinity War, there are no real gaps between the movies. They are tied into each other in a way that barely leaves room for the imagination. To me it feels like cliffhangers or events that feel much longer in comics just have to happen way too quickly in movies so they fit with the plot. Of course spreading it out over two films can be a solution, but we really donâ€™t know yet how this works out as I think itâ€™s a first in the MCU. I would have liked to see that for Civil War, but they chose to just put it all in one movie.

The MCU movies are never really bad, thatâ€™s for sure. But the gravitas, the meaningfulness and the overall tone that comics and graphic novels have worked hard to establish for themselves has not found its way into the movies yet. In fact they mock themselves way too much to be able to do that. They are way too lightweight, thereâ€™s hardly very big surprises and the formula that the MCU seems to follow is in fact more that of a Disney movie than that of a graphic novel. There are movies like Sin City that have found a voice similar to the comics theyâ€™re based on, but the Marvel comics are not even trying to connect to that aesthetic it seems. Theyâ€™re not trying to be niche, theyâ€™re trying to be blockbusters. And maybe they aren’t both really.
So in the end, Infinity War was a fun, popcorn-y experience, nothin that stays on your mind for too long. Like many of its predecessors it is aiming for a very ambitious goal but it has to fall short because itâ€™s form is not up to the comic material itâ€™s based on. Maybe after this phase and with the huge successes in their pocket Marvel rethinks what the idea of a Marvel film should be and whether there is a way to maybe not please everybody but start to make movies that are meaningful and engaging, not just passive pleasure machines. Logan has shown one way to maybe get there, how to leave gaps for the audience to fill. But for now, all that the MCU has given us, is a big cotton candy for the nineteenth time, and I for one, feel like my interest in that is wearing off.