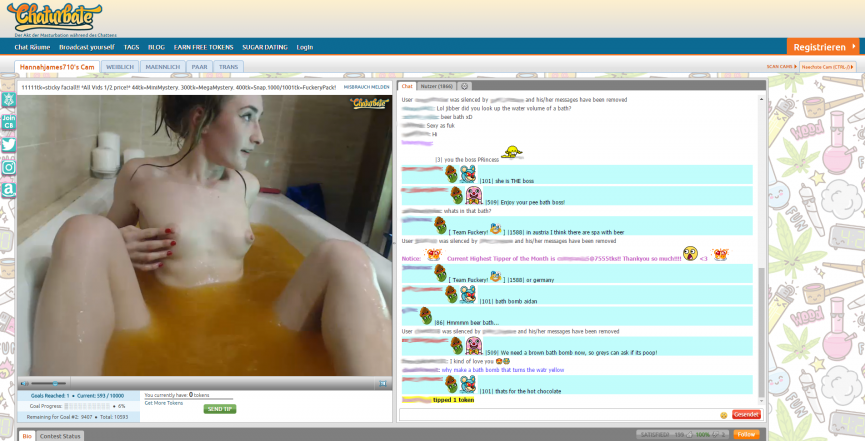 There is a reason why this blog is not only called â€žwisdom of lifeâ€œ. Because it is my impression, that for the most part life doesnâ€™t make much sense. And in fact it canâ€™t because sense or meaning is something that is without exception constructed by humans. We make sense of it, if at all. It doesnâ€™t come from anywhere else.

Now this article is pretty different from most others on my blog. Itâ€™s about a part of the web that is 18+ or NSFW (not safe for work) and thus is itself only suited for adults. Itâ€™s an article about adult websites and what to make of their existence, among other thoughts. As a scientist I analyze structures of websites and their communities. But this is not at all a scientific article, merely an opinion based on experience on what seems to be a subject not oftenÂ talked about publicly. Iâ€™d like to challenge that notion. So this is not a spoiler warning, but a warning nonetheless: If youâ€™re up to accept that challenge, pleaseÂ do read on. If youâ€™re easily offended, or weirded out by the idea of adult websites and porn, than pleaseÂ just click here and youâ€™ll be lead to a less offending place. Thx!

Many people do not get what I do. That is, they donâ€™t understand what a researcher does, donâ€™t know about the tasks or how they are performed. Yet they probably acknowledge the role science and researchers play in society. Thatâ€™s why there is a certain respect for my kind, despite people often not knowing what it is we do. Other professions donâ€™t have that luxury. There mayÂ also a myth about them, maybe people have a preconception about what is involved. But theyâ€™re not as accepted or respected, although maybe they should be.

The Rise of the Amateur

Now of course with the power of the live stream (invented in the 1990sÂ by a Dutch adult entertainment company according to Barss’ book) some new opportunities have come up. Where the streamers on Twitch can discuss with theirÂ viewers what and how to play, can react to criticism and feedback and of course can be tipped and then thank each contributor personally who donates money, buys a subscription or anything like that, those are options available to the adult world of live streaming as well.

So on streaming sites like Streammate or Chaturbate, the user can create an account and decide to stream live via his or her own webcam at home to other logged in users of the site. Usually access to those public rooms with the stream and a chat function is free, on some platforms not even an account is necessaryÂ to view streams, but you need an account to chat. Options vary by site: Either you can take your favorite model private, which means you enter a private stream and chat room for which you pay a specific rate by the minute. Or you can tip the model you are watching, sometimes getting them to do certain things for certain amounts of tips. Most sites use a kind of premium currency to mask the fact the u spend real money, a technique we also know from Free-to-Play-Games. Itâ€™s not like an entirely new concept, professional call girls and escorts, strip clubs and the like have been around for a very long time, indeed it is called the oldest profession of the world for a reason. However allowing guys and gals to anonymously offer a similar service from the safety of their home, is a different story altogether. Or not?

Interestingly enough media theorist Marshall McLuhan referred to call girls as an example of the changes the telephone brought about to society.

You might notice this focuses on the ability to communicate and to fit in with anyÂ social environment. Now if we take this further into the digital age, the location (of both provider and consumer, or indeed prosumer) becomes even more irrelevant. Models can create and shape the real and virtual rooms they offer their services in as they choose (within technical limitation that is). And the actual role of sexual acts is probably not the most important thing too, being articulate and interesting to talk toÂ might beÂ much more important to entertain an audience and get them to be interested in the show and whatever it is you have to offer (which basically can cover all fetishes you can imagine). So it’s even less specialist than what McLuhan described in a sense, because it involves creating interesting visuals, interesting conversations, broader incentives for people to come back and actually pay you, because they are not forced to do that with many platforms. Apart from the service providers that keep a sizeable share of the income (much more than you’d probably think in fact) a cam-person is a solo entrepreneur of sorts, doing everything themselves including marketing and distribution if they so choose. It is a business in the end, but not one dependent on just a singleÂ ability. Or even looks, given the broad range of ladies that you can choose to visit. There is an element of democratization too, because no gatekeeper gets to decide what is deemed to be beautiful or sexy.

More to think about

Now, I wonâ€™t debate moral standards connected to this phenomenon, but there are legal and other aspects to it. Thus there are rules of course. E.g. while the platforms are designed for individuals to participate freely and by own choice, it is clear that such platforms could also be exploited by ruthless people. But that is in fact true for many jobs.

Now from my experience, which is limited to talking with performers and viewers, I can say it’s not an easy job at all. People can beÂ rude, especially when they think they’re customers and have paid for the right to misbehave. Focusing on a pleasurable view (technically and artistically) for the audience while trying to interact with dozens or hundreds of chatters is many times more complicated than what adult actors and actresses in porn already do and it needs constant attention. You can’t really plan much how the show goes, you can’t prepare for everything that might happen for sure. Just like on other social media you need to be authentic and ready to run with anything that happens. And even if you succeed at everything within your power it might not click and viewers stay away. Or worse, they are there watching but not tipping or talking to you. I know from experience how it is to not get much of an audience reaction to a talk or a seminar, now imagine this while sharing as intimate a thing as masturbation with hundreds of people you can’t perceive unless they type into their keyboards. I’d think it must be nerve-wrecking at times, and it’s much harder to distance oneself from what essentially is a very personal service, although it’s broadcasted through the World Wide Web. It is for a reason that the term Global Village (also coined by McLuhan) has become widely usedÂ with the digital age, because little communities form around this seemingly superficial performers.

There really is no climax here (pun intended). I haveÂ to say that I’m quite impressed with what is involved in being a cam model, and it’s a very different thing than what you might expect. As with most things, you shouldÂ become educated about it before judging it. In fact if you’ve seen movies like this years “Fucking Berlin”Â that try to depict certain aspects of this industry, you may realize the clichÃ©es at work there. If you ever get to know people who actually do it, you may be ableÂ to get rid of some prejudices you might have. It’s a world that is quietly there but can be easily ignored and forgotten about but that deserves a closer look in my humble opinion, as it is a the forefront of innovation both in terms of technology and society. And one also should remember, that just like withÂ any other online communication, there is always a human being on the other side.

PS: In addition to the articles and books I pointed to, there are some interesting documentaries to watch (also NSFW of course, embedded below): I Am A Cam Girl DocumentaryÂ (Vimeo), Cam Girlz DocumentaryÂ (Vimeo). I also like to point out the 2014 study “IP without IP” by Kate DarlingÂ about intellectual property and the online adult business.