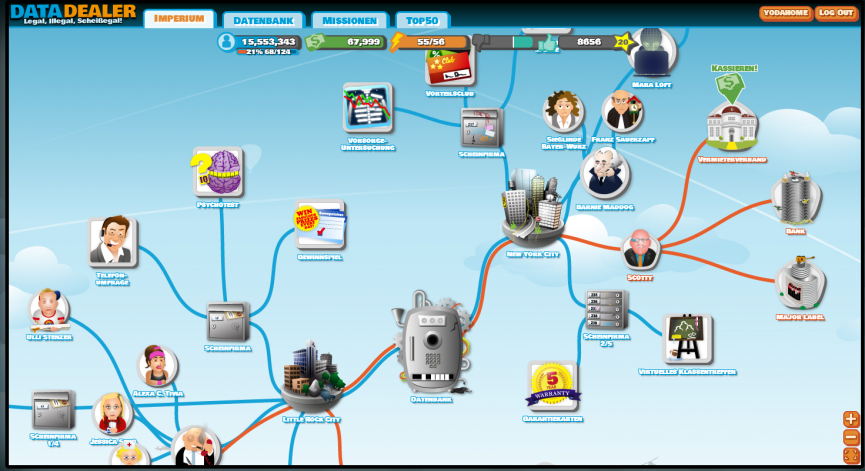 Or to put it another way: Making things takes a long time even when they are kickstarted. Thatâ€™s basically the common Erkenntnis from several crowdfunding project I backed over the last years. Iâ€™d like to take a look back and see how far theyâ€™ve come.

Double Fine Adventure – Broken Age – one down, one to go

DFA, as fans and backers call it, was one of the most successful kick starters of all time with over 3 Mio. USD raised. They also are very big with transparency, documenting where the money went to, discussing almost everything with the backers in the forums and let you see the creation evolve with the ongoing documentary series.
The first half of the game came out early this year after they decided to split it up. And while theyâ€™re way behind the estimated date (Oct 2012) I very much liked the game as you can clearly read here. Still, the project shows all the ups and downs of game development: great design, a resourceful and motivated team, tight budgets and schedules, release, sales expectations and whatnot. Very interesting to see this happen and Iâ€™m very proud to add my 30 $ to this. Trailer follows for sheer gorgeousness.

Many games that wereÂ funded through crowdfunding seem to be connected to well known creators (like Tim Schafer) or well-known franchises, while neither really guarantees a successful campaign. To see Al Lowe coming back from retirement for re-making his first Leisure Suit Larry adventure in gorgeous HD playedÂ a big part of me backing the project. I guess like others I trusted him to be good to his own creation (for which he doesn’t have the rights). And the game that came out really delivered what was promised without compromising anything. They even managed to add new stuff to the game because of the 655.182 $ they raised. There were plans to remake other games in the series, if the first one made enough money. We donâ€™t know if this will work out but we can hope. Obviously adventures are anything but dead.

If you are a true nerd you have at some point in your life watched at least one episode of the Angry Video Games nerd, a pretty choleric character who â€žplays the shitty games that suck assâ€œ. Funded via indiegogo (325.327 $) the movie that James Rolfe planned for a very long is finally done and on tour through the US with a release on disk happening in September. Work for the movie started long before the funding campaign because three years would actually be a pretty short time for an indie movie, as you could learn from quite frequent status updates James did. So itâ€™s really more like seven. And while the main show – the movie – seems to be finished IÂ guess I’mÂ still waiting for my perk. But this will sort out Iâ€™m sure. g Have a look at the latest trailer!

Dreamfall Chapters: The Longest Journey – on time (kind of)

The title tells you everything you might need to know: The longest journey (possibly) was the last great classic point-and-click-adventure that came out in 1999. It was followed by the sequel called Dreamfall in 2006 which wass a Third-Person-Adventure centered around some new characters but extending the storyline of the first part. Plans to finish the story arc came and went until finally creator Ragnar Tornquist et al founded their own studio (Red Thread Games) and did a successful crowdfunding for Dreamfall Chapters raking in 1.5 Mio US $. The game was supposed to come out at the end of 2014 but has since been announced to be released seperately in (guess what) chapters. Chapter One is still due in November so we will see how that works out. Computer games obviously are a hard thing to get right and almost always takes more time (and money, because time = money) then originally planned. I’m really looking forward to returning to this world and actually pledged more than I have ever paid for any other game before. Looks good though (trailer below).

Factorio is a crafting game, a genre that kind of not existed before Minecraft, because then we called it simulations. Yeah, I’m that old. However, it’s all about building machines to collect resources and to create goods from them, to research new machines and to build yourself up from mechanical to electrical contraptions thereby automating most of the hard work including defending your territory. It’s an insane puzzle if you will, and I already loved the early alphas. Now it already pretty much looks like a polished game with a backstory and levels and stuff and it’s really a lot of fun yet still in official alpha state. Although I have to admit it’s no longer as addictive as e.g. Craft the World. It’s available for Windows, Mac and Linux from right here. It’s pretty impressive what a mere 21.626 € that were raised through Indiegogo helped create. Watch.

Data Dealer started out as a little demo of a web game that tried to spoof/exploit the inner workings of the industry that creates the recent rise of data-driven web services. In DD you are the collector of precious private data to create complex and (possibly) complete profiles of as many individuals as possible. Those you then sell to interested customers and steadily try to build your business and extend your database. It’s currently in beta after having raised over 50,000 $ via Kickstarter in July 2013. The original demo has been greatly extended, the beta is available here but not much has happened since december and there no word when the game will be finished. Kind of in limbo I’d say. (Does anybody remember Afterlife by LucasArts btw.?)

This one is the only project I ever backed on the german crowd-funding platform startnext.de (in November 2012). The whole concept of crowdfunding doesnâ€™t seem to grow as quickly in Germany although it is embraced by many people, as many successful German projects on other platforms show.
This movie, although only partly crowdfunded (a little over 100.000 € were thrown in by backers), probably wouldnâ€™t have been made otherwise as it was not very successful at the box office although it had some well-known and loved puppet characters (and actors) that have been popular in Germany for years. If you throw Disney-money at it you get the Muppets, but this is much smaller and puppet comedy has only been a phenomenon here for a few years.
It really became a nice movie and pretty much stayed on schedule. So Iâ€™d call this one a successful campaign in any way.

There are other projects I backed so I might do this again some time. In general I realize that most of the time the estimates for time and money needed are very optimistic at best. Almost all projects I backed needed to extend their time frames and that includes books, comics, music, video games and other stuff. So I guess it would be nice to be just a little more generous when looking at the numbers. But as I’ve learned this I now usually add a year or so to any estimates creators make. The Scotty method doesn’t probably work here which is a shame, right?