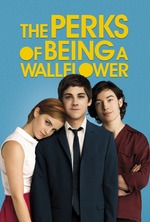 This one really surprised me, as I initially put it on the list because of Emma Watson. It starts off as a movie about a quiet boy (with some dark time behind him) named Charlie who comes to high school in the early 1990s and has no friends but then meets a bunch of people (may one say geeks) who accept him as he is. This includes a girl and right there you have the ingredients of a typical coming-of-age story. And for the second act it actually is, complete with first love, first kiss and everything falling apart. But then towards the end this takes a whole different turn explaining what happened to Charlie and putting him in a completely new light. The feeling I got can perhaps be compared in certain ways with when I watched Donnie Darko.

I actually like how the time period is presented, and I do love the characters. And I liked the role David Bowie’s “Heroes” is given although in my movie mind it’s still connected with Christiane F., a German movie. But I would think that this is a coming-of-age film that not just relies on nostalgia. Which is a good thing, right?