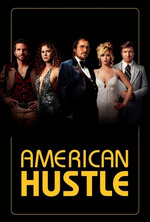 Imagine you are a sleazy trickster and impostor and then imagine you meet the girl of your dreams. A girl that is an even greater trickster than yourself. Everything goes great and then you get caught in the act by a . That is basically the setup to the movie and as you might guess what happens next is that the FBI agent who caught them, very eager to move up the ladder, forces them to set up a fraud scheme that grows into unexpected depths involving corrupt politicians and the mafia.

Almost everybody does a great job here, Bale and Adams kick ass while Louis C.K. makes a beautiful abused boss to Cooper’s character. Oh, and Jennifer Lawrence is a great femme fatale, too, who doesn’t really get anything.
And while the story is mind-boggling to a degree and the characters are top notch the look of the movie tops those easily. The depiction of the US in the 1970’s is colourful and very impressive yet doesn’t get in the way of story or characters which over the course of the film grow quite a lot. And it also manages to bring all the mayhem together in the end, which not always works out.

I don’t know about the Academy Awards, but I do think this is a very fine piece of cinema, perhaps a modern The Sting if you like.