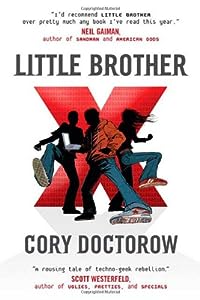 Back from a short vacation to the sea I managed to read a book I had on my list for some time. “Little Brother” is a a hacker novel by Cory Doctorow. I wrote about him before (here (german) and here (german) for example) so I’m not going introduce him again and rather fast forward to the novel itself. It tells the story of protagonist Marcus Yallow aka w1n5t0n who is 17 years old and lives in San Francisco, has a thing for technology and manipulates so-called “security systems” as a hobby so he can get out of school unnoticed. One day after having done just that he and his friend witness a terrorist attack after which they’re taken in by the DHS. At a secret prison they’re interrogated for days but when they’re finally released Marcus’ best friend is missing.

This marks the beginning of a guerilla war against the DHS and an increasingly paranoid world that is willingly trading freedom for what they believe is security while it’s really general suspicion. Marcus fights back by making clever use of the enemy’s technology to turn it against him.

The story is aimed at young adults and it introduces the concept of security and cryptography on a level that is interesting, exciting and hands on. It’s modern science-fiction which for the science means that there are some gizmos that don’t really exist but easily could and most of them in fact do although they may go by a different name. For example there is an operating system called ParanoidLinux described in the book which actually motivated an equally named project to be started but it was abandoned pretty soon. However, many of the features are available in the Privatix linux distro. While SF is always thought to play in the future, “Little Brother’s” future is very much our present plus ten minutes. It describes security and control mechanisms that are already in place all around the planet aggregated in one area and how they may be used. It’s probably one of the coolest hacker books sinceÂ  Cryptonomicon and it manages to communicate the dangers of the totally connected world we live in today which is especially hard to teach young people because most adults and teachers don’t really understand the subject. “Little Brother” however made me think about my privacy habits and it gives dozens of hints to get you started e.g. how to use The Onion Router to browse anonymously. A warning should be issued that you may get a little paranoid having read the book. But that’s not necessarily a bad thing.

As is usual with Doctorow’s books you can find an electronic version for free online. (Und es gibt auch eine deutsche Übersetzung). But because it’s a great book you may want to buy it.

Those links here take you to Amazon.de where you can buy the different versions of the book in German and English. I’d like to close with a quote by Benjamin Franklin, who famously said:

“They who can give up essential liberty to obtain a little temporary safety, deserve neither liberty nor safety.”