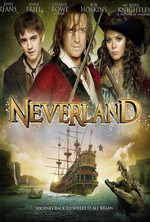 Huh, did anybody ask for the origin story to Peter Pan combined with Oliver Twist? Anybody?
Quick story: Peter and lost boys live in London pickpocketing for Jimmy, who looks out for the kids somehow while teaching fencing. To impress Jimmy Peter breaks into a store where he’s supposed to steal a glass sphere which just happens to transport you to Neverland if you hit it hard. There they encounter the Pirates, the Indians (both of which accidentally got here by sphere) and a strange alchemist (also kind of a gardener) who created the spheres to begin with. The only natives are the fairies, uh, “tree spirits” who have the dust the pirates are after but are protected by the indians. And then they all start fighting each other. Half way through Peter almost dies but is saved by the tree spirits and thus starts to fly. And in the end someone loses his hand.

This could have been rather interesting but I don’t see why one would try to semi-scientifically explain what is basically a fairy tale. Neverland is supposed to be at the centre of the universe (thus no time), fairy dust is some kind of mineral and even Peter’s absence of memories is explained. One shouldn’t take all the magic out of this.
While the effects are sometimes not that convincing I find the story more troubling. Hook and Peter being friends prior to being enemies seems a bit forced. The rest is basically lots of stereotypes.

This is seen as kind of a prequel to Hook but I really had a hard time seeing the charm (or childishness) of this movie here. Why so serious?