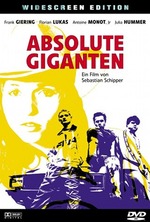 This is by far my favourite German movie. The story is really simple: Immediately after his probation ends, Floyd decides to board a ship and to leave Hamburg for good the next morning. He and his closest friends Walter and Rico realize that they only have one night left together. And they want it to be gigantic.

To me there’s so many layers here. It’s a great cast, even the supporting cast does impressive work in creating quirky, memorable characters. There are just beautiful images. Lots of gags in the great script by Sebastian Schipper but also minimalistic dialogue that leaves room for said images. It’s a young movie but not hectic. The table soccer sequence is probably one of the coolest things ever put on film. The soundtrack is eclectic.
The movie beautifully oscillates between the greatest night and the worst night one might imagine.
It’s a look into the heads of three young guys in the Nineties. What they aspire. What they dream of.
It’s about boyhood and adolescence in general but wrapped in a very German style and with much local atmosphere. It’s about a great friendship coming to an end while most movies show you how things start out. It’s a small even tiny movie that just creates this special mood I still haven’t found in any other movie. I’ve probably seen more than a dozen times and I still think it’s the greatest work of art there’ll ever be.