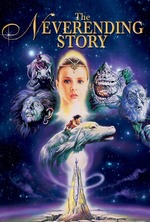 This is (by far) one of the best German movies ever. It tells the tale of Bastian who gets his hands on a book called “The Neverending Story” and enters the world of fantasy which is under attack by a mysterious force to consume everything.

Wolfgang Petersen managed to make Michael Ende‘s novel into a breathtaking special effect film, and mind you that it was made in 1983 (when I was born) and thus is permanently connected to the childhood of a whole generation. I think it’s fair to say that this is the German “Star Wars” as it was the first major special effects movie made in Munich’s Bavaria Film Studios with a huge budget. Because the (longer) original cut was lost until 2012 the movie has only recently been released on BluRay, brilliantly remastered by the way. And just like the original Star Wars (minus the digital updates) it holds up pretty great compared to fantasy movies of the last decade and their digital special effects which, more often than not, try to balance out a foreseeable and/or uninspired plot. So if you haven’t seem it yet, there’s really no reason to go and see the next Twilight clone or Hunger Games imitation unless you had a go on this masterpiece. And you might want to take your children, too.