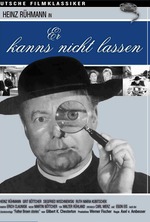 One of the great German british criminal comedies. *g* Father Brown encounters some kind of crime in any village he is send to work, and despite him being a priest he constantly manages to solve those crimes.
Although the story based on a character by G.K.Chesterton takes place in the british countryside the movie was shot in Austria and is starring many great German actors playing along leading man Heinz Rühmann e.g. Lina Carstens, Ruth-Maria Kubitscheck and Grit Boettcher.