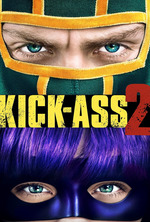 The first Kick-Ass drew heavily from the real world superhero paradigm and the graphic violence. The character of Kick-Ass as a wannabe superhero who constantly fails yet grows in the process was intriguing to me and Hit-Girl, a girl that is turned into a fighting machine by her dad, added the action to the mix.
Many of those aspects come back, although the cast has grown older. The logical progression has to be that other wannabe superheroes step forward which is exactly what happens while Hit-Girl’s challenge is basically teenhood and Kick-Ass kind of tries to continue what he started.
We have an ok bad guy, not the Mark Strong type though, more of an evil looser who calls himself the Motherfucker and his evil crew. I think the Hit-Girl story is kind of unnecessary, the kind of growing up that happens at the end of the movie could have been at the core of her development instead of the whole high school arc. Jim Carrey does a great job and I think he was gone far to quickly, from the setup it would have been a great twist if he could have ended up the bad guy. It’s a good movie nonetheless, lots of fun, lots of blood, only few didntneedtoseethats.
I haven’t read the comic though, but I definitely will.