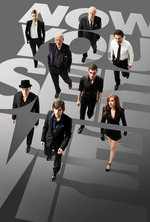 Magic meets heist movie meets guess-who-is-the-bad-guy-here-or-is-he. This is a really neat attempt to wrap mystery inside mystery, irritate the hell out of the audience but still make it a good and entertaining story. There’s lots of action apart from the magic tricks, of which most are explained in an entertaining almost Penn & Teller-like way because they’re closely interlinked with the big WHY of the film so there’s actually a reason to explain it.

Then of course there are great actors at work, there is no way not to be entertained by watching everybody in it but of course especially Eisenberg, Harrelson, Freeman and Caine. As for the action mentioned, it comes in nearly every feasible form, including chases by foot, on top of cars and inside cars with the occasional crash. It almost seems they are trying too hard to put as much stuff in as possible. Then again the movie falls not flat like other action flicks sometimes do, there is still depth and character to everything, you don’t feel stupid while guessing what actually goes on. And I think you don’t really find out until the end, at least that worked out for me.
It all comes together quite nicely in the end and I have to say I didn’t see anything I truly disliked. It’s very balanced for all the different elements that there are and I guess that’s pretty much as good as it gets.