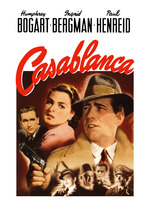 On the surface it’s a melodramatic love story but it’s also heavily influenced by WWII and so there is obvious political commentary against the nazis there.
Rick’s CafÃ© AmÃ©ricain, a nightclub in Casablanca, Morokko, is a place where many foreigners meet, especially people who are fleeing from the German grasp. Owner Rick not only has to deal with the local police force, but also special interests of his various guests. He tries to not pick any sides and get in the way, but this isn’t always easy. One Ugarte leaves a “letter of transit”, a stolen document that allows passage throughout Europe, in his club, which he wants to sell later. Rick hides it, but soon after that Ugarte is arrested and later dies in custody without revealing where the letter is. Captain Renault suspects the letter is in the club, but even after a searching he can’t find it.
This is when Ilsa Lund, a former love interest of Rick’s, and her husband Victor Laszlo, who works for the czech resistance, come into the club. They both want to flee to Lisbon, but German Major Strasser wants Laszlo arrested by Renault. Ilsa left Rick in Paris and Rick doesn’t seem like he wants to let that go. So he has to decide whether to help Victor and Ilsa or stay out of jeopardy which he has been working hard to avoid so far.

p>It’s a classic film noir and probably has been cited a bazillion times in other movies, especially the final scene at the airport is very famous. I don’t really know whether the romantic aspects are as interesting as the political subtext and it is by no means a very deep or complex movie by today’s standards. But it’s worth watching nonetheless.