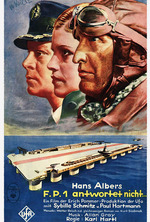 Essentially a love story between adventurer Elissen (Hans Albers) and Claire Lennartz (Sibylle Schmitz), sister to the owners of Lennertz-Werke. Created by Droste, a friend of Elissen, they plan to build a swimming platform in the Atlantic ocean so that planes between Europe and America may land and refill during long range flights.
After two years the platform is completed but attempted sabotage delayed the project. During that time Ellissen tried to fly around the earth and because he was gone, Claire fell in love with Droste. When contact to the platform is mysteriously lost, she begs Elissen to fly her to F.P.1.
One of the more famous actors apart from the main cast is Peter Lorre who plays a photo journalist. The story might not be very deep but the movie still is an interesting artifact from the UFA of the 1930s, if you’re interested in film history.